Tonight I said a goodnight prayer for my 2 year-old daughter. Just a thank you for the day prayer and I hope she has sweet dreams. We are an inter-faith family and don’t always pray but I did it tonight. I ended it with “I hope she has good dreams. Amen.”

Right after I finished she said, “And the man doesn’t pull my hair.”

I locked eyes with her huge eyes that were serious and furrowed. I hesitated.

I wish I was better at knowing what to say, was what immediately came to my mind.

Last week my nanny was leaving a restaurant with my youngest, holding her hand, they were with another nanny and the child she cares for. Suddenly my nanny was no longer holding my daughter’s hand.

She looked back and a strange man had my daughter by the hair.

Immediately the other nanny said, “What the fuck are you doing?” I like that nanny.

My nanny doesn’t swear and is sweet but strong and was confused. He let go of my daughter’s hair and then the woman next to him said, “He doesn’t know what he’s doing.”

I should insert here that I was chaperoning my oldest child’s field trip so you aren’t thinking, see that LA mom should have been with her child, even if I was getting my legs waxed it doesn’t matter but I feel compelled to interject that.

Anyways, another person jumped up and started apologizing and saying he was the supervisor to the two people.

It turned out they are mentally challenged.

When I saw my daughter after I got back from the field trip she looked at me shyly and started to cry. I didn’t want make a huge ordeal over it so I asked her if someone pulled her hair and said no one will do that again and that her body is her body.

That was it, she got over it quickly. She also cried when she saw my husband.

The case worker called us that evening and informed us it was a second time that the man had grabbed someone inappropriately and she was very sorry and he would not be allowed to go out on those group outings again.

My husband and I felt bad.

And also of course, glad that he’s getting the care he needs. Well, I hope he is.

Tonight when my 2 year-old said that right after I prayed I was surprised.

I again, didn’t know what to say and didn’t want to say too much.

She asked, “What’s that guys name?”

I don’t know I answered.

She then said, very slowly, while waving her little finger in front of her, “That’s not OK.”

Not it’s not, I replied.

Her brothers had entered the room by then and my oldest started to smile a little bit at her cuteness and my 4 year-old boy said if someone did that to me I’d fight them. No, you scream and run to an adult you trust I countered.

Then I ushered them out and said tell her goodnight boys.

My 4 year-old ran over to the crib and I thought he would kiss her sweetly but instead he bent his arm in front of his mouth and said “Hey, smell this,” upon which he made a farting sound and ran out innocently laughing. The conversation forgotten. 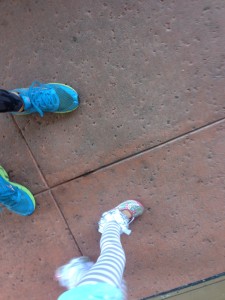 I’m not sure why I’m sharing or what my point is just a strange occurrence for us.