Take Your Kid To An Eye Doctor

A few years ago I overheard some moms saying that a specialist had come to their school and tested many of this kids and talked about how many kids go un-diagnosed in the “hey I need glasses department.”

I remember my mommy radar buzzing saying take your oldest in.

Cut to us asking his teacher if he might be dyslexic.

And then finally cut to me taking him in at 6. Only to find out he could not see very well. He needed some help.

He was far sighted.

My pediatrician never suggested I take him in and neither did a teacher. With glasses my 6 year-old became a reader. He could see and his headaches abated. 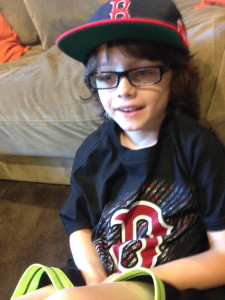 I remember thinking I should take my middle child in. I didn’t.

Until two days ago.

As he sat in my lap and suddenly could not make out the very large shape in front of him for the eye doctor, I sat back in the chair and felt panic begin to overtake me.

My middle child, it turns out, really can not see well, at all.

We’ve had a difficult time with him. He gets tired, screams. Turns out he is probably doing that because one of his eyes had given up and was turning in and he was working so hard to see. 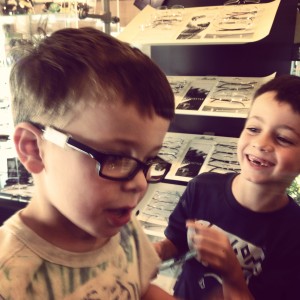 We literally can not wait for his new glasses. A whole new world will be open up to him.

Ever since he was little I knew something was off and I couldn’t pin point it down.

I talked to the nice man at the eye doctor who makes the glasses and he said he’s been in the eye business for 20 years and he sees this happen all the time. And the eye doctor said the same thing!

Why aren’t we being told to take our babies in?

You should take your babies in between 6-12 months it turns out.

Most children will have an eye exam in school around kindergarten or first grade. The American Optometric Association however, suggests parents should take their children in for their first official eye exam by six months old. While that seems young, the earlier you start caring for your child’s vision, the better.

Kids can’t verbalize what they don’t even know. My child doesn’t know the world can be any clearer. I literally, again, sorry to repeat myself, but can NOT wait for his glasses to be put on his face.

The eye doctor was so glad I brought my 4 year-old in because once he turns 8 the eye would be almost un-treatable.

Anyways, this is just bizarre to me. I don’t understand why pediatricians aren’t telling parents to take their kids to the eye doctor.

So do it, you have nothing to lose and possibly some sight to gain.