Surely not the craziest idea I’ve ever had…

Life is busy. Very, very busy. So, when an idea came to my head prior to the start of the school year, I thought I was crazy. Very, very crazy.

Even typing that makes me fearful that my world will explode.

I love television. Always have. Always will.

When I was pregnant with my first child, I was surrounded by moms who said things like  “I’m not going to let my child watch television until they’re 2.” And even then, I knew mothers who weren’t letting their children watch T.V. at 5. And it’s ALL FINE…I am not judging.
I just knew this would not be the kind of mother I was. I just don’t see what’s wrong with programming, when supervised on content and time.

Ok, so now I have children in school…2 out of 3 are gone all day working hard and coming home to do the rat race of homework, dinner and bedtime. Last year and this summer felt so darn busy and hectic to me that when I had this idea of eliminating television (only during the school week), I really had no reservations about it…well, unless you count me freaking out about how I’m going to keep kids occupied while making dinner or keeping the little one busy so I can do homework with the older two. I was sure this was going to be more painful for me than them.

But, I talked to my husband and it was settled. No television during the school week.

And they were just fine. They whined for 3.45 seconds and moved on.

They are genuinely playing, and getting along better…not that it should surprise me.

School started August 21st…we are now going on week 4 of school and we have not once turned on the television during the week. Before or after school. The world did not explode, the homework is getting done and bedtime is approached with a little more organization.

Courtney in protest. She’s at my feet while I make dinner. Not wanting to play. 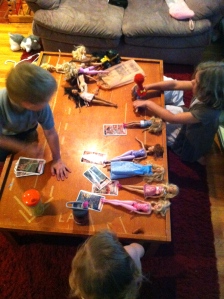 Barbie is the central figure of playtime, almost always.

The kids fight just a little bit when trying to settle in to play together or figure out what they’re going to do to occupy their time while I’m busy or with another child.
But they are doing it.

And here is the real kicker. They have not once…NOT ONCE…asked me to watch television.
Either they don’t really care as much as I thought they did or they are so fearful of me, the torture of no television would still be easier than the wrath of mom coming unglued.
Either way, we are all just fine with it…but you bet your bottom dollar, I am…I mean we are geeked for Friday nights.