OdysseyO And The Visionary Behind It

I love Burbank….most anyone who knows me, knows this fact about me.

Ok, now, that that’s out of the way, I want to tell you something about Burbank. The skyline of the city is changing this week. The show, Cavalia is back with a new performance called OdysseyO and by Monday afternoon, the 110 foot, 10 story White Big Top will be up and ready for their opening night, Wednesday February 27th.

OdysseyO is a show…an amazing show, featuring the connection between horse and man, envisioned by one of the creators of Cirque Du Soleil, Normand Latourelle.

This week, Mr. Latourelle gave me 30 minutes of his time to ask him anything I wanted. 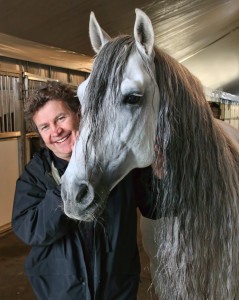 So, I looked at all of the press materials for the show and decided I didn’t want to ask him about the details of the show that were all laid out before me. I could read that information anywhere.

I wanted to know about creativity. His inspiration and how it works for him. 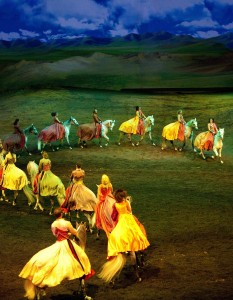 Mr. Latourelle is from Montreal, Quebec and is a visionary leader in the performing arts world in Canada, wrangling up many accomplished accolades. As I mentioned before, he actually helped CREATE Cirque Du Soleil. Even if you’ve never seen a Cirque show, I’m just going to assume you know the awesomeness that I’m talking about.

I asked him where his inspiration comes from and he said “I don’t know. I just get an idea and I do it.” He explained that most of his ideas come while he’s sleeping, kind of like dreams, but somewhere between sleeping and waking.

He explained “When an idea comes back to me over and over, I know I have to do it.”

I get that. I suppose what makes the difference between staying a dreamer and becoming a visionary is acting on those ideas and not letting them stay dreams. 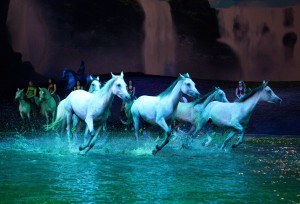 Let me tell you about OdysseyO for a minute and you can see where the dreamer becomes a visionary:

“OdysseyO will take the audience around the word as 67 horses and an international cast of 45 artists play and demonstrate their intimate bond. The 15,000 square foot stage features a real carousel and an 80,000 gallon lake in front of a stunning video

backdrop the size of 3 IMAX screens.”

“It’s an Odyssey—you’re going to travel throughout the world.” he stated as he explained all of the places you’ll travel in the duration of the show. “(You can have)..nice discussion with the kids after… Where have we been?”
Visionary indeed.

The last time Cavalia was in Los Angeles was in 2010 and he says, “This one is more accomplished. I had the experience of the first one. I’ve created a bigger stage and more sophisticated technical grid that allowed us to do more. We have gone as far as a touring show can go.”

A bigger stage indeed. The main tent is twice the size of the last one we saw here in the same location. The infrastructure is capable of supporting 80 tons, including that full sized merry-go-round as its lowered to the stage during the show. 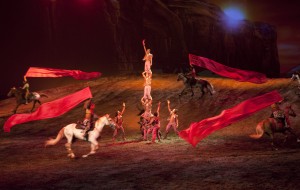 “We have a real forest…the stage gets filled with water. We’re not Universal Studios, but its pretty close.” he said chuckling.

When I was asking him about what he’s most proud of in his life, he immediately said his family. Nothing compares to that and as a matter of fact he left Cirque Du Soleil to stay home and help raise his two boys, fully “understanding how important that was.”

Another thing Mr. Latourelle said struck me, something else he’s proud of…
“(It makes me proud) to see how many people are making their life out of my idea…my small ideas and they get good life.”

This quite brilliant man said one more thing to me before our conversation was over..quite possibly a new motto I may just have to remind myself of over and over,

“Nothing is more satisfying than bringing happiness to this planet, that’s what creation is all about. If you’ve got something to give…give it.” 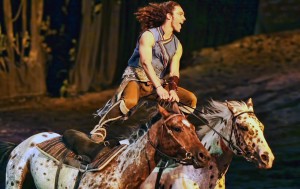 OdysseyO opens Wednesday, February 27th in Downtown Burbank. For all details and how to purchase tickets, visit www.Cavalia.net