Last night, after being up since 3:30AM with my oldest throwing up, I put all the tired kids to bed at 6:30PM and poured a glass of wine and started to watch “The Normal Heart.” 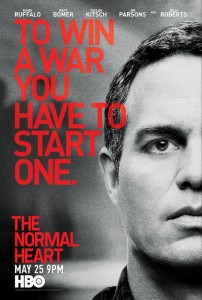 Right away I became tense and surprisingly emotional.

I don’t have that many gay male friends and I’m too young to have been around when the AIDS crisis was blowing up in the early 80’s but I am a mom, I admire anyone who has the bravery to live their life openly gay, I support equality and I’m human and I ache when I see another human being ache. I lived in Hollywood nearly 15 years, half of my neighbors were gay men.

I give credit to one mom in Sioux Falls, South Dakota for helping open my eyes and heart at an early age.

When I was 15 I lived in Sioux Falls and my best friend had an uncle who was gay. And who was dying of AIDS.

He was able to come out from California despite his dementia setting in.

Megan’s mom is such a pillar in the community that I think her demeanor of, this is all beyond OK, just set the tone.

I will never forget sitting next to him at dinner and him dropping his fork. I bent over and picked it up and handed it to him.

I obviously knew AIDS was not transmitted via touch but it was a humongous moment for my 15 year-old self.

Megan emailed me and reminded me that he also showed up to our dance recital in full on stage makeup.

Megan said, no one even batted an eye. Again, this was ’93 in South Dakota.

I give credit to Megan’s awesome mom Kim for forging this. They both spoke at our college a few years later, The University of Iowa and I remember Kim talking about how her brother was so handsome, tall and blonde and they were from a small town and he was a football player and no one suspected he was gay.

Perhaps you are thinking, why are you writing this and it’s because the movie last night made me think about just how sad it was for the gay community when it first started happening and how still even to this day it is hard to come out and live as a gay person.

Just a few weeks ago I spoke with a strong, pretty, established lesbian who spoke of how it is hard, even now.

Last night, it just ate me up to see the mom cry when her dead son was returned to her.

Anyways, I was reminded again of how moms can have such an impact on us. Even when they are not your own.

And how becoming a mother has made my heart grow so much bigger in that it bursts and buckles in pain and hope that humanity will just get kinder as we forge ahead.