Just By Watching Her

I began blogging in 2006, when Expressing Motherhood was launched in 2008 I made it private. Then I stopped blogging because I didn’t want to become too busy. This summer though some part of me screamed, start writing, a lot. I don’t normally post personal posts on this site but I have been a bit more of late.   -Lindsay

One of my strongest memories from childhood is watching my mom get ready in the bathroom. 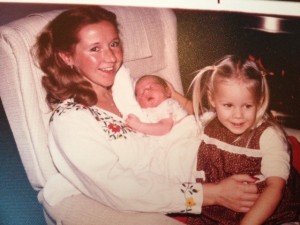 My mom with me and my baby brother.

Whether it was putting on her makeup or doing her hair I feel as if most of my childhood was spent on the cool floor of whatever house we were living in watching her take care of herself.

I also watched her exercise, a lot.

She opened up one of the first aerobic studios in Tucson when my brother was 7 months old. I spent a lot of time watching her lead her classes. With her super blonde hair, adorable figure, a tiny package with a lot of drive.

My mom could have stayed home but she didn’t want to ever let her nursing license lapse. My grandmother had grown up dirt poor and had instilled in my mother that she needed to have something to fall back on, just in case. 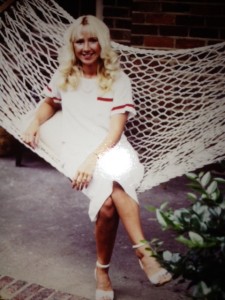 Sometimes my mother even waited tables. My dad was working for a huge corporation making good money and yet my small, blonde, youthful mom chose to wait tables part time when one year there was a nursing job shortage in whatever state it was we were living in. 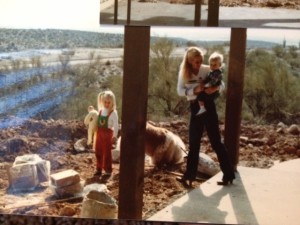 I’ve watched her put her foot in her mouth and seen her admire more educated women, sophisticated women, well spoken women, unlike her more bohemian self who tended to put her foot in her mouth. I have seen her beat me to the knowledge of what the newest tech trends are since her divorce last summer. I have seen her unable to throw bullshit around as well as others at cocktail parties, something I am better at.

The “just in case” my grandmother had warned her about became in fact her situation.

I’ve watched my mother go through this divorce, nearly 40 years after saying I do in Iowa to her high school sweetheart, with a determination to take care of herself. She allowed herself to take as much care of herself as she could knowing a lot of people get really sick after something as big as a divorce after a marriage that long. 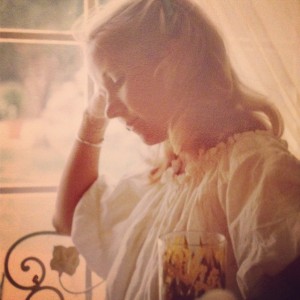 I watched her continue to do her hair, put on her makeup and laugh about getting hit on by a man at the airplane bar.

I don’t remember much of what she has said. Partially because we aren’t the most emotionally connected family in regards putting our feelings into words but I have watched her for 36 years.

I don’t take much time in the bathroom, I throw my hair up often into a wet bun. I used to go out in my early 20’s in flip flops or tennis shoes and baggy old Levi’s that fell around my hips. I barely wore makeup.

Yet, I always felt confident in how I looked.

My 2 year-old watches me now. 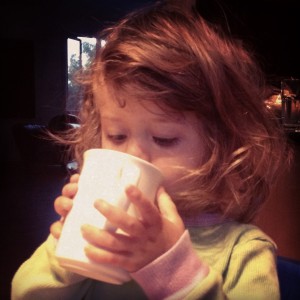 She already prefers more bracelets then I do, perhaps it skips a generation.

My mom continues to take care of herself and I have learned that this is what you do to make yourself happy.

Even though I do it considerably different I have learned so much just by looking up to her from the cool bathroom floor.

I watch her now and see the lines that travel her face. For all her primping she doesn’t want to do any surgical procedures. “Women should have lines, I just love women with lines on their face, they look so cool,” she’s told me multiple times. 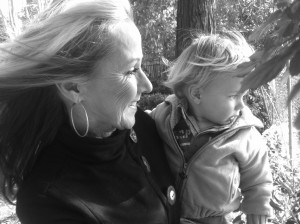 So I watch those lines settle and deepen and spread and yet I see her taking off to exercise on her visits here or exercising while watching the kids. It makes me smile and feel comforted that I did not imagine my childhood. It also brings me comfort knowing that although I am raising my kids differently my mom instilled in me some traits I am thankful for.

I just have to make sure I am doing them so my daughter can peer up at me and see me taking care of myself the way I want her to do it for herself one day. 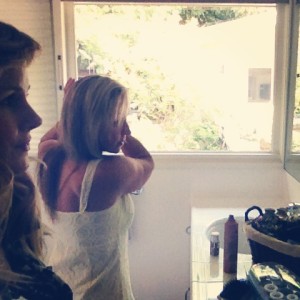 A recent photo of me and my mom, getting ready in the bathroom.