An Interview with “The Gay Dad Project”

A few weeks ago on Twitter a Twitter handle popped out at me “The Gay Dad Project.” I wanted to know what it was about. So I tweeted them and asked if I could interview them. One of the co-directors, Erin Margolin, got right back to me and was happy to do it.

It’s an impressive documentary in the makes and Erin has three very small kids so the fact that she’s doing this is even more impressive.

Gay Dad Project obviously jumps out at one, what is your documentary about?

Our documentary is quite far from finished, but in general

of the closet after being in a heterosexual marriage.

When I say “kids,” I’m not talking about little ones; I just

mean anyone who has experienced this — kids like me.

will be as long as my parents are still alive.

What drew you to this project?

My own life and living through this. My dad came out of the

closet when I was 15 years old. He and my mom had just

celebrated their 20th wedding anniversary. That was back

could just talk to anyone about it.Back then I was desperate

to connect with other kids who had gone through this. I

wanted to read books about it. But there wasn’t much

out there. That is *finally* starting to change and I have

hope that the trend will continue. 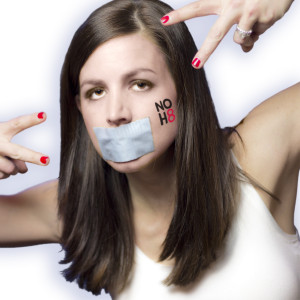 Erin as part of the NoH8 campaign.

I see that you have a producing partner, how did you two become connected?

Do you live in the same city?

Amie and I found each other through a mutual friend who also had a gay dad.

Amie lives in California, and I live in Kansas City, so unfortunately we don’t

live near one another. But in a way it’s good because we each do different things

and we’re in different areas…so it sort of spreads more stuff around!

How did you channel your creativity pre and post children?

are obviously a busy mom.

I have always been a writer and have kept journals

off and on throughout much of my life. That evolved

into blogging. I started my own personal blog in 2007

when my twin daughters were potty training! I’ve

kept that up over the years and wish I had more

so I guess you could say my hands are full again

for awhile. It’s a good kind of full, it’s fun being a

mom to three girls. And once the youngest starts

kindergarten I’ll be able to throw myself headlong

How much time do you put into the documentary?

How many months or years have already gone into it!

Did you get financial backing?

We started filming a year and a half ago. We are not constantly

on our budget. We did a crowdfunding campaign on

Indiegogo last year and raised $20,000, but we quickly

realized that wouldn’t get us as far as we wanted to go.

We have tentative plans to launch another crowdfunding

campaign, but we haven’t finalized those details just yet.

Do you have plans to take it to festivals?

We would love to do that! Sundance HERE WE COME!

In all seriousness, Sundance would be my dream

come true; but we’re not done yet and we have

a lot to learn as far as all the different festivals go.

And there are rules with each of them, i.e. if you

submit something, you have to wait a certain period

of time before you can submit to another one. It’s a

process, a long one, and we’re learning as we go.

What do you hope to accomplish by making this film?

We hope to shed light on different kinds of families.

We want other “kids” like us to know they’re not alone.

There’s still such stigma attached to being LGBTQ,

and the whole coming out process can wreak havoc.

I wish it wasn’t that way….then again, if it wasn’t,

he was 12 years old, but knew it wasn’t acceptable. So he

married my mom and figured he could stuff it down,

pretend it away. One day he realized he couldn’t do it

anymore, & that’s when he came out, left my mom, and moved out). 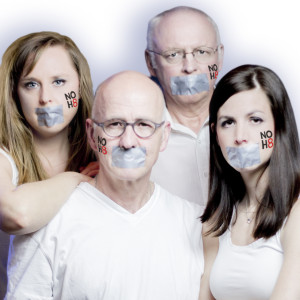 This is a photo of Erin, bottom right, Erin’s dad is seated to her left and that’s Erin’s producing partner Amie and her dad, standing.

If you are interested in being interviewed for “The Gay Dad Project” please email either Erin or Amie.